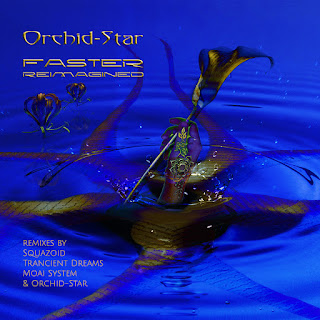 Although I’ve always been partial to Orchid-Star both live and recorded, It’s been a while since I played the Faster CD. Now although I can see the cover has had a make over that will catch the eye, it’s the content that counts. So without further ado I’ll address the results of pressing play.

The album opens with the slow version of ‘Brighter’, which begins in an ethereal fashion before flickering as if it’s about to take off, then settles into a funky world fusion with melodic keys and vocals. Whilst band percussionist and DJ Sean Spindrift takes ‘Shouty One’ into the realms of the uplifting progressive psy-trance that he’s know for. Whilst Squazoid flirts with the tempos of ‘A Better Ride’, at times letting the vocals play out and at others applying plenty of fx and squelch.

The dnb mix of ‘Surya’ is a lovely piece of Asian electronica that centres around the vocals, a perfect tune for a stomp in the sun. In comparison the Trancient Dream mix of ‘Puja’ is more of light and chilled tribal plodder. The atmosphere changes once again with Pete Ardon and Sand-Ra’s mix of ‘Lotus Bloom’, which is on the whole a straight up world music track. However, that’s not to say it hasn’t got some interesting and unique nuances about it. The mood then switches again as Sean re-appears adding some punch to the melodic, with another progressive psy take on ‘Barefoot’.

After all these twists and turns of style the last three settle somewhat of an Orchid-Star formula with the Moai System remix of ‘Prchla, a cocktail of wonderful vocals, reggae riddims and gypsy violin. I could very well use the same description for the first section of the live version of ‘Orchid-Ska’, but as the title promises it picks up the pace with a unique ska fusion. Whilst the finale Inne’s Thankyou mix of ‘Dans La’ is somewhat slower with a touch of guitar.

To summarise this collection with it's fresh lick of paint, displays both the uniqueness and diversity that Orchid-Star offers. I've got a few personal faviourites in here and they may well differ from yours. However, if you're unfamiliar with the band why not dive in and have a listen and keep your eyes peeled on the circuit when the festivals return.