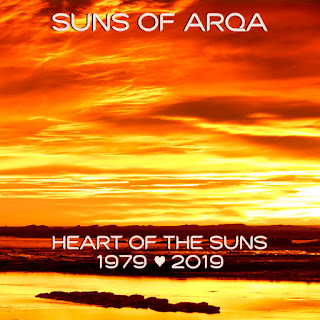 Formed by Michael Wadada in 1979 the Suns of Arqa have blended Indian Classical and Celtic sounds with a constantly changing line up that over fourty years has astoundingly featured over 200 musicians. They have also worked with artists such as Prince Far-I, 808 State, Youth and Astralasia broadening the sonic pallet into fusions of Dub and Drum & Bass.

The Suns of Arqa will always hold a special place in my heart, as I utilised them for the first track of my first ever DJ gig and they also featured on the first mix of mine uploaded online. My first experience of their output came rather late considering, picking up their L.P. ‘Kokoromochi’ in 1992 and have dipped in here and there over the years ever since. Therefore, some of the tracks featured on this compilation were already familiar to me and I was also eager to hear those that were not.

Not surprisingly considering the longevity of the Suns of Arqa there have been a fair few compilations to whet the appetite and entice listeners into their back catalogue and future releases. So naturally the question of anyone standing on the precipice and intrigued to venture into their world, would surely be ‘Why this one?’. Now this isn’t the first compilation for me and the previous one is a treasured part of my music collection. What stands out about the tracks selected here, is that Andrew has obviously put a lot of thought with his extensive knowledge to include multifarious examples of their back catalogue, without being obvious. From the bamboo flutes, harmonium and other instruments that form the sound of the Indian Sub-Continent and their Ragas, to the electronic ambient re-mixes, dub reggae fusions and beyond. Which I found to be an intriguing and satisfying journey that takes the mind from the beaches of Goa to the river Ganges, from Spiritual ceremonies to Hindu Temples.